Vice Chancellor Meets With The Senate And Congregation Members Of ESUT 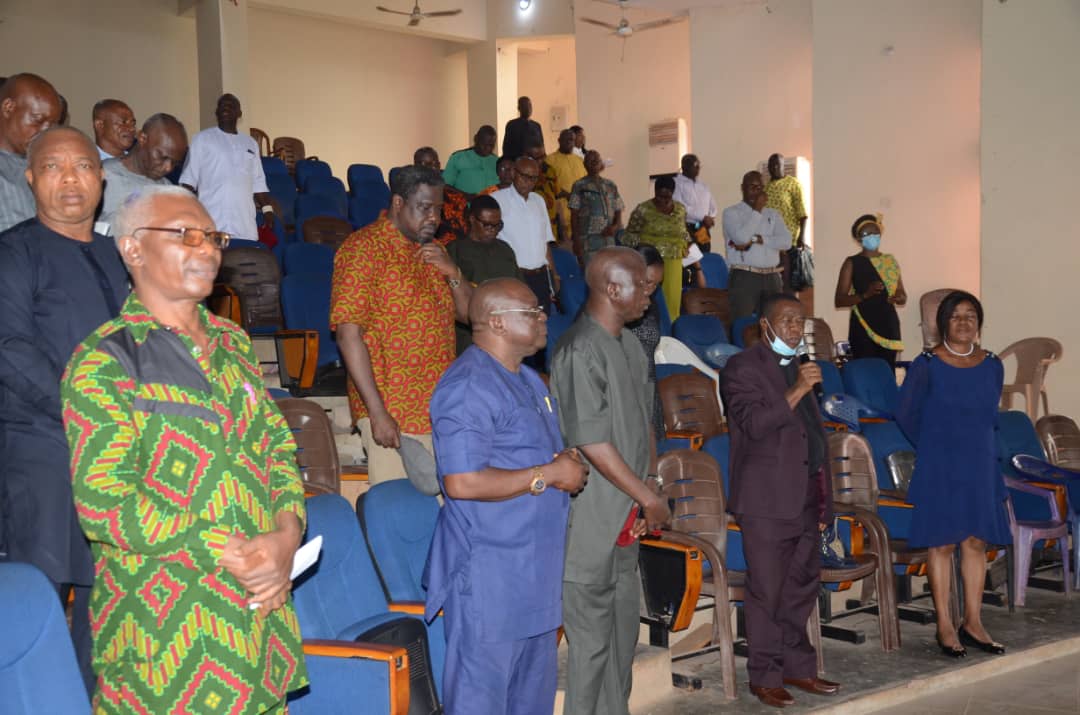 ESUT Vice Chancellor, Prof. Aloysius Michaels N. Okolie and his team of management, Wednesday 27th and Thursday 28th April, 2022 met separately with the Senate and University Congregation and presented their plan of action to take the University to the pinnacle of academic excellence.

Addressing the two vital organs of the University, Prof. Okolie said he was on a mission to evangelize ESUT and take it where it rightfully belonged. He called for the cooperation of both the Senate and the Congregation in dealing with identified problems of “loopholes and financial leakages, corruption, paucity of critical infrastructure”, lack luster approach in discharge of duties, huge debt profile of over N955m in addition to unpaid March and April salaries, poor record keeping in project management and others.

The Vice Chancellor while pleading for industrial peace and cooperation of all to enable him translate his great vision into reality for the good of the University warned that any clug in the wheel of progress in his drive to achieving set targets would be pushed aside. He urged key officers in the University (Deans, Directors and HOD’s) to demonstrate competence and academic content in order to remain relevant in his administration.

TACKING HEAD-LONG SOME OF THE CHALLENGES

The Vice Chancellor deplored the current epileptic state of power and water supplies on campus and informed the ESUT Senators and congregation that an eminent son of Enugu State – Igwe Cyprian Nevobasi – Ogilisigbo – Ezeani III of Mmaku Kingdom who had been recently sworn in as Chairman – Enugu West Traditional Rulers Council had been approached and have taken up the challenge of immediate migration of ESUT to a new feeder for improved power supply. Also another noble son of the State – Senator Chief Ken Nnamani (former President of the Senate of the Federation) he said, is being approached to help procure a new sub-station with 750KVA transformer for ESUT from the Federal Government.

He assured that the new management would look into and ensure reticulation of water in all the students’ hostels and faculties.

Prof. Okolie stated that a committee had been set up to design template for uploading all research efforts of staff to ESUT website for global visibility and better ranking of the University just as another committee had been commissioned to handle digital processing of Alumni Transcripts and ensure conclusion of same within 48 hours of commencement.

The Vice Chancellor emphasized that staff promotions and salaries were matters of right and should not be allowed to spill into arrears. He told the audience that already he had opened up collaborations with a number of institutions including Garden Institute in Jerusalem, IOWA University in the USA etc and would review existing MOUs with other institutions to ensure transparency and mutually benefiting relationships.

The new ESUT Chief Executive warned against promotion of clannish interests in the University and maintained that adjunct appointments in departments would henceforth reflect areas of need. He assured that all staff due for regularization would receive their letters of regularization within the next two weeks even as he promised to get all outstanding certificates of graduates of the University signed before the next convocation holding later in the year.

The Vice Chancellor disclosed that the suspended SUG election would hold through online voting in May 2022 and appealed to all students to support the vision of the new management.

In their separate remarks after the maiden address to the Senate, Professors Osita Nnamani, Chinwuba Owoh, Chinedu Aguba, Mellitus Ezeamenyi, Ike Oluka, Ngozika Mbah etc expressed delight and enthusiasm at the Vice Chancellor’s eagerness and optimism to get the University on the right track and thanked him for the vision and prompt steps already taken to fix some infrastructures etc. Some of them described his appointment as divine intervention while some called on him to stand firm against clannishness and all sorts of academic fraud etc.

In a similar vein, the congregation representative at the Governing Council, Dr. Peter Nwankwo, SSANU Chairman Comrade Okey Animba and NASU Chairman Comrade Cosmas Ajah etc during the congregation meeting listed all the accumulated welfare benefits and allowances including salary arrears owed staff and urged the Vice Chancellor to find ways of addressing those needs to help motivate staff to greater productivity. They however welcomed his great vision and pledged their cooperation to ensure a greater ESUT.